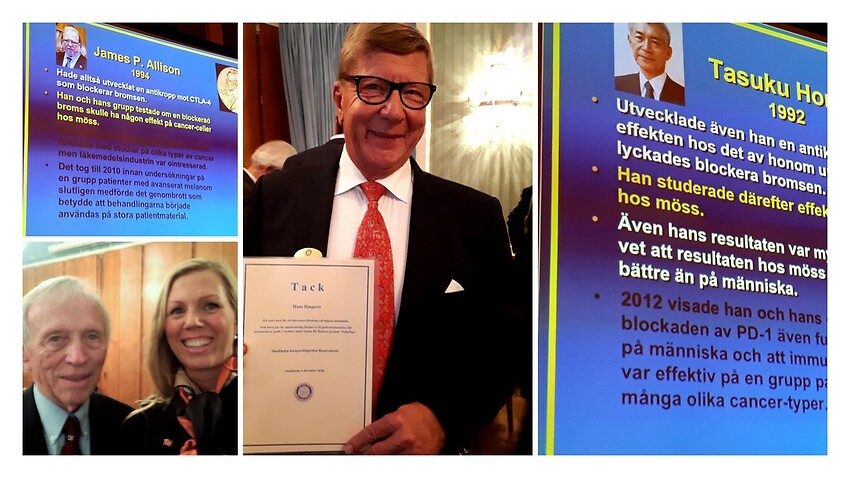 The Nobel Prize in Medicine 2018 is awarded jointly to James P. Allison, an American immunologist, and Tasuku Honjo, a Japanese immunologist, "for their discovery of cancer therapy by inhibition of negative immune regulation."

Yesterday, I had the wonderful opportunity as an invited guest to listen to the Dr. Hans Ringertz who previously was the chairman of the Nobel Assembly at the Karolinska Institute i.e. the assembly of the Nobel Committee which awards the prize in Physiology/Medicine. Hans gave a lecture regarding the discoveries that the two immunologists Mr Allison and Mr Honjo has made that will assist the world in finding treatments and cure for Cancer.

It was the most interesting lecture this very competent gentlemen Mr Hans Ringertz gave, and the audience was completely silent listening to every word during the whole presentation.

James P. Allison studied a known protein that functions as a brake on the immune system. He realized the potential of releasing the brake and thereby unleashing our immune cells to attack tumors. He then developed this concept into a brand-new approach for treating patients.
In parallel, Tasuku Honjo discovered a protein on immune cells and, after careful exploration of its function, eventually revealed that it also operates as a brake, but with a different mechanism of action. Therapies based on his discovery proved to be strikingly effective in the fight against cancer.

As a thank you gift to Mr Hans Ringertz for his excellent lecture and description of the discoveries by the two Nobel Prize winners in Medicine this year 2018 - Hans was awarded with a certificate from Rotary that he made it possible for 120 people in the world to get a Polio Vaccination as a donation in return for his presentation yesterday.

Isn’t it wonderful to know that we are coming closer and closer to finding efficient treatments for Cancer – and furthermore it was wonderful to be part of the audience for a lecture that results in a donation of 120 Polio Vaccinations where 40 vaccinations is donated from Rotary and 40 donations are from Bill Gates and additionally another 40 Polio vaccinations from Bill’s wife Melinda Gates!